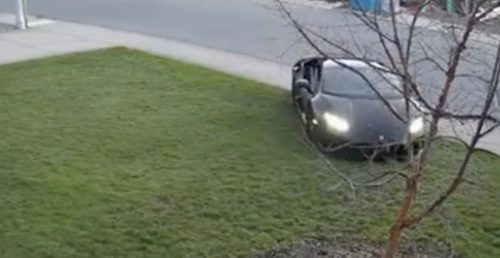 Abbotsford police are looking for help in identifying the driver of a sports car that narrowly avoided disaster last weekend.

The incident occurred on March 19 around 7:20 p.m., and a video surveillance captured the drama on tape.

The video shows a black sports car turning on the corner of a residential street in Abbotsford as it begins to skid. The front of the car crosses the sidewalk onto the lawn of a residential property before the driver brakes, backs up and continues on his way.

It’s unclear how fast the car was traveling, but the video seems to indicate they were well over the limit for a neighborhood street like this. Fortunately, there were no pedestrians walking on the sidewalk at the time, otherwise they would have potentially been directly in the path of the vehicle.

There is no license plate visible in the video that police could potentially have used to identify the driver, making the job of investigators a bit more difficult.

AbbyPD is seeking the public’s help in identifying a black sports car and its driver involved in this dangerous driving incident on March 19 at 7:27 p.m. in the 2600 block of Sunnyside Street. If you can help us, please contact AbbyPD File 22-11301 pic.twitter.com/cqmafQZlmr

While no details were leaked on the car’s potential make or model, some users commented on the video shared by AbbyPD on Twitter suggesting it could be a Lamborghini Huracan.

If that were the case, according to Lamborghini Vancouver, a 2017 Huracan would cost the buyer around $274,000 plus applicable taxes.

Anyone who may have information relating to the incident is asked to contact the Abbotsford Police Department Citation File. 22-11301.